A Couple of Other Projects from this Month

Here is my second stab at guitar cookies.  I really dislike that cutter.  These cookies break so easily, no matter how cool they look. :(

And here are some dinosaurs I did for a little girl's 7th birthday party.

Here's another shot of them after I had started packaging them.  Found a really cool free dinosaur printable treat bag topper that I used for the small ones.  They have a lot of other items in this set besides just treat bag toppers. I heat sealed the bags with a lot of space at the top and then attached the toppers with double stick tape.

My cousin graduated from nursing school yesterday and had asked me to do some cookies for the event.  Actually, not just some cookies but over 300, plus some for her own party that night.  I had never before tackled such a large quantity at once and wasn't really sure I was up to the challenge because, first of all, that is a lot of cookies, but secondly, I am just not set up for that sort of volume because I have zero counter space in my kitchen and usually do my cookies on a folding counter height work table.  I called my mother-in-law and asked if I could commandeer her dining room while working on these and she readily agreed.  She even helped with some of the caps and scrubs tops.

I had been planning and planning these in my mind because I was so worried about being able to get them all done.  Initially I had planned to also include these great thermometers like Sugarbelle did, but eventually nixed the idea because I decided to keep these as simple as possible due to the volume and three colors on one cookie would have required too much drying time.  I ended up doing the ones shown as well as a reverse version of the hearts in white with red lines and blue tablets as well.

I knew I really wanted to do the nurse caps, but couldn't find a cutter for it.  Well, I could, but it was copper and I refuse to pay the prices required for copper cutters.  Cheap Cookie Cutters had one on their site, but it said it was unavailable and once again, I never received a response from them when I sent an email to inquire.  I really am baffled by the messages people post on their facebook page about excellent service, but I digress.  So, my wheels started turning.  I had a HUGE egg cutter from Easter that I found to be too large to ever use, so I broke it open and started shaping it into the nurse cap with my pliers using a picture of one of the copper ones as my guide.  I started having a little trouble at the very top making those little bitty turns, so I called my friend Patrick who is a jeweler, artist and sculptor and asked if he could help me out.  Of course, he said he would.  He quickly finished it off and soldered it closed.  And there ya go, a great nurse cap cutter that I paid nothing for!  (Check out some of Patrick's work here)

I was really excited about the way the capsules turned out.  To make them, I used the large plastic Wilton H cutter and just cut the middle of the H out and had two capsules.  If I did them again, I think  I would likely use the I instead, because these were a little longer than I wanted, but overall they worked great.  I lucked out when I went to get the rainbow nonpareil at Joann Fabrics.  Usually, they have a 40% off printable coupon each week online, but this week they had a 50% off one!  So, I paid a little over $2.00 for that container of nonpareil.  I was a little surprised that this container didn't have a shaker lid, but it was fine just to sprinkle them on with my fingers.  I first outlined and filled the white section of the capsule and then added the nonpareil.  By the time I was done with the gazillion of them I was doing, they were dry enough to come back and immediately do the red ends of the capsules.

I had also stressed about the prescription bottles. I'd seen where others had used a simple tombstone cutter.  I was certain that I had one in that giant bag of over 200 cutters I found locally through Craigslist for a mere $20.00, but was never able to put my hands on it.  It could be that I never had one to begin with and was just somehow remembering incorrectly or perhaps I accidentally gave it to my niece when I gave her a bunch of those cutters that I already had (no worries, I still have about 130 - 150 of them that I didn't have).  I had another tombstone, but it was a little more elaborate and was a bit too dumpy for a pill bottle.  So I started racking my brain trying to figure out what I could use.  I was at my local bakery supply looking through their cutters and spotted this one and decided it was perfect: 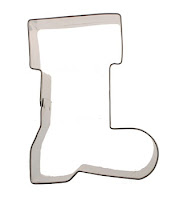 Not too bad, huh?

I was down to the wire at the end and had not done the details on the scrubs tops, but I knew I couldn't leave off the stethoscopes.  I ended up doing them with a black food color marker and I think they gave the effect they needed to, although, of course, the dimension of piping them would have been better, but time was truly running out.  I think I drew those on about 1 hour before delivery!

As simple as they were, the hearts made for a life saver and they looked really great, too!  I was able to knock out about 100 of those (in both red and white, just no pic of the white) in a little over an hour.  Great payoff on a little amount of work!

And the good news is that she loved them!!  She posted a pic of them on her facebook last night and noted that her really cool cousin had done them for her.  And to top that off, someone commented with, "And they tasted really good, too!!"

Mission accomplished, although I can guarantee you that I will not undertake that many at one time ever again!

B
I've recently become obsessed with making and decorating cookies and just wanted a place to have a chronicle of my creations. I am very new to decorating cookies, so please be kind and know that I am still learning with every single batch I make. Thanks for stopping by!